Most of the time, these two words, “Healthy” & “Chips”, don’t go hand in hand.  I have to admit, I am a huge fan of the crispy salty delights, especially tortilla chips dipped in homemade Salsa and Guacamole, as you may know from this post here. But, for the Teacher Appreciation Lunch at The Ancona School, I needed a snack that was more in line with these!  It goes back to that whole “Eat Well, Feel Better” motto we have been trying to live by lately.

Beets are one of my favorite veggies, and this time of year sweet potatoes are everywhere, so I sliced and baked both of them into a delicious, salty snack.  Most recipes call for olive oil, but I decided to splurge a bit so I added some White Truffle oil. It was for all the amazing teachers that spend countless hours helping our children, so it is the least I could do, right?

Mind you, I thought this was going to be a “Chique” & simple task.  I sliced, tossed and baked 4 large sweet potatoes and 4 medium beets to produce one big bowl of chips, but it took me nearly 5 hours. Labor intensive but again, it was for our dedicated teachers who are shaping future generations, so it was worth it! 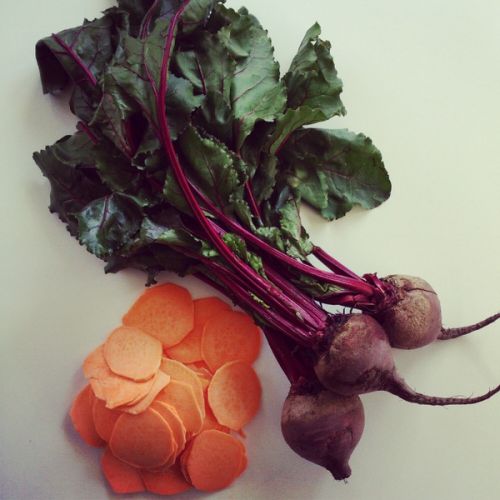 The teachers loved them and they tasted heavenly. A little less crisp than I would have liked, but there is a fine line between burning and crisping, so I tried to error on the side of under baking them rather than the alternative.  I did serve the overdone chips to the boys and they still devoured them, but I wanted the pretty ones to go to the school. 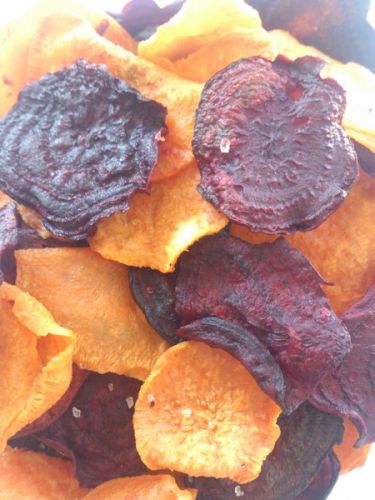 I altered the recipes I found on line a bit, so here is my version of the “Chique” Truffle Oil Sweet Potato & Beet Chips.  If you try, let me know how yours turn out and if you have any suggestions. 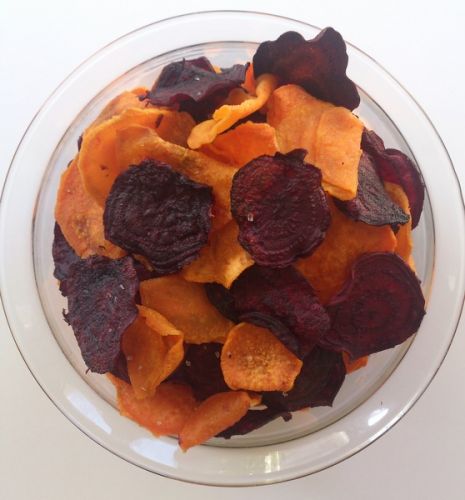 Preheat oven to 400 degrees, with racks in center and lower positions. I did the sweet potatoes first and then lowered the temp to 350 for the beets. I also used a mandoline to slice them thin as cutting by hand would have taken even longer. They need to be thin but not wafer thin (1/8″ to 1/16″ thin), but being consistent is key so they all cook evenly. They will never all be the same size depending on the varying shape of the potato or beet, which is why some of mine burned. Place them in a single layer on a baking sheet. I used a kitchen brush to coat them on both sides with the oil. You could toss them depending on how big of a batch you are making. I sprinkled with sea salt before putting them in the oven, but you could do it after as well. Bake, flipping once half way through, until centers are soft and edges are crisp, 22 to 25 minutes. I cooled on a paper towel. They do crisp up after they cool. Store in a paper bag for ideal freshness. Enjoy!