Parker still loves the award ceremonies after a swim meet as if it were his first.  Parker has raw talent when it comes to swimming.  It would be difficult to follow in his footsteps which is why we did not force PJ to be on the team. Of course, we want him to learn how to swim for safety reasons and he did in fact pick it up very quickly.  But, we wanted him to  have his own successful sport which is why we enrolled him into Tae Kwon Do.  It really has been amazing for his self confidence, self esteem and discipline coming from someone other than his parents is key.  Over the summer he decided he wanted to be on the swim team as well.  Being in the 6 & under category gives him less competition and a chance to feel good about the sport.  Well after his first few meets we now realize both boys are naturals!  Is it too soon to say “scholarship”?  Fingers crossed! But more importantly, the team is growing and the friendships are flourishing. 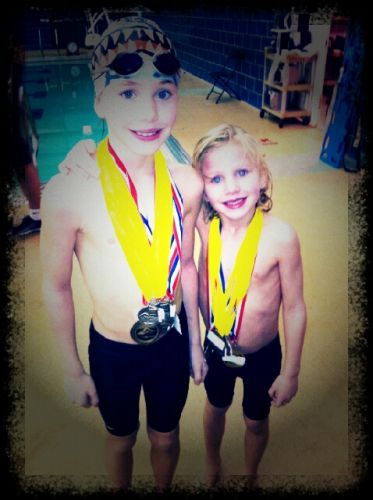