In previous years my  mother-in-law would sew costumes for the boys which are much better than the cheap store bought outfits.  This year we decided to go old school and use stuff we already had in the house to dress up for Trick or Treating!  We had to supplement a few items to really spark up the costume but we scored big “thrifting”!  I found a pristine pin striped sport coat in Parker’s size for $3.99, an antique pop gun for $9.99 and a black hard brief case for $0.99 at our local Salvation Army store.  Of course, my dad, helped Parker “style” his outfit.  At one point Parker exclaimed “Why does Papa know so much about gangsters?” I will leave that to your imagination!  For PJ, he is a natural Rock Star.  It didn’t take much to get him into character.  He already had most of the accessories in his closet so all we added was a faux leather jacket from Forever 21 that cost $9.99.  I told him it was a boys store too as he wouldn’t be caught dead in a girl’s coat.  We painted on a Paul Stanley inspired star and he was ready to go! Best Halloween costumes to date for under $25.00.  P.S.  PJ wears his leather coat everyday! 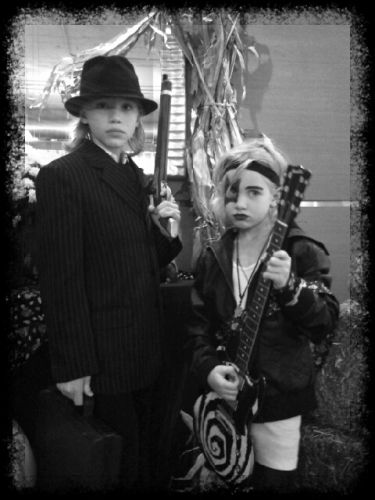